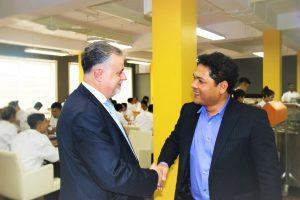 The Academy of Culinary Arts Cambodia hosted a business lunch event for the very much appreciated members of the NEA (National Employment Agency).

The goal of the event was to introduce the academy to Mr. Hay Hunleng – Deputy Director General of the NEA – and his colleagues in order to discuss possible future synergies.

After a tour through the ACAC facilities, the NEA members were invited to the ACAC’s  VIP-Restaurant where they were served the following:

This was the first meal served by the students on their first day of school and they can be proud of having done such a good job. After the lunch, Mr. Hunleng held an encouraging speech to the students, talking about the current tourism/hospitality sector, about unemployment in Cambodia and about the need of well skilled chefs.